Home » Blog » 15 Amusement Parks in and Around Austin

15 Amusement Parks in and Around Austin 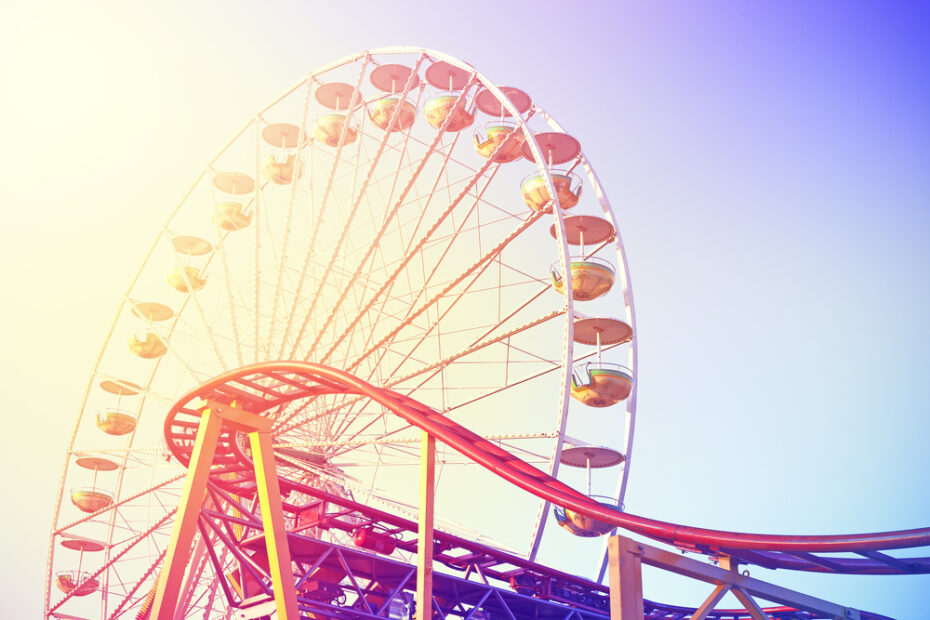 Amusement parks in Austin and Central Texas have become even more important in the pandemic era. With indoors restrictions still in effect, amusement parks are more of an outlet than they’ve ever been.

Amusement parks in the Austin, Texas area run the gamut, from world-class coasters to 550-foot water park chutes to the special needs-specific Morgan’s Wonderland. And don’t forget Blazer Tag, one of the biggest laser tag arenas in the country.

Want to know the most fun amusement parks in Austin and Central Texas? Read on to find out. 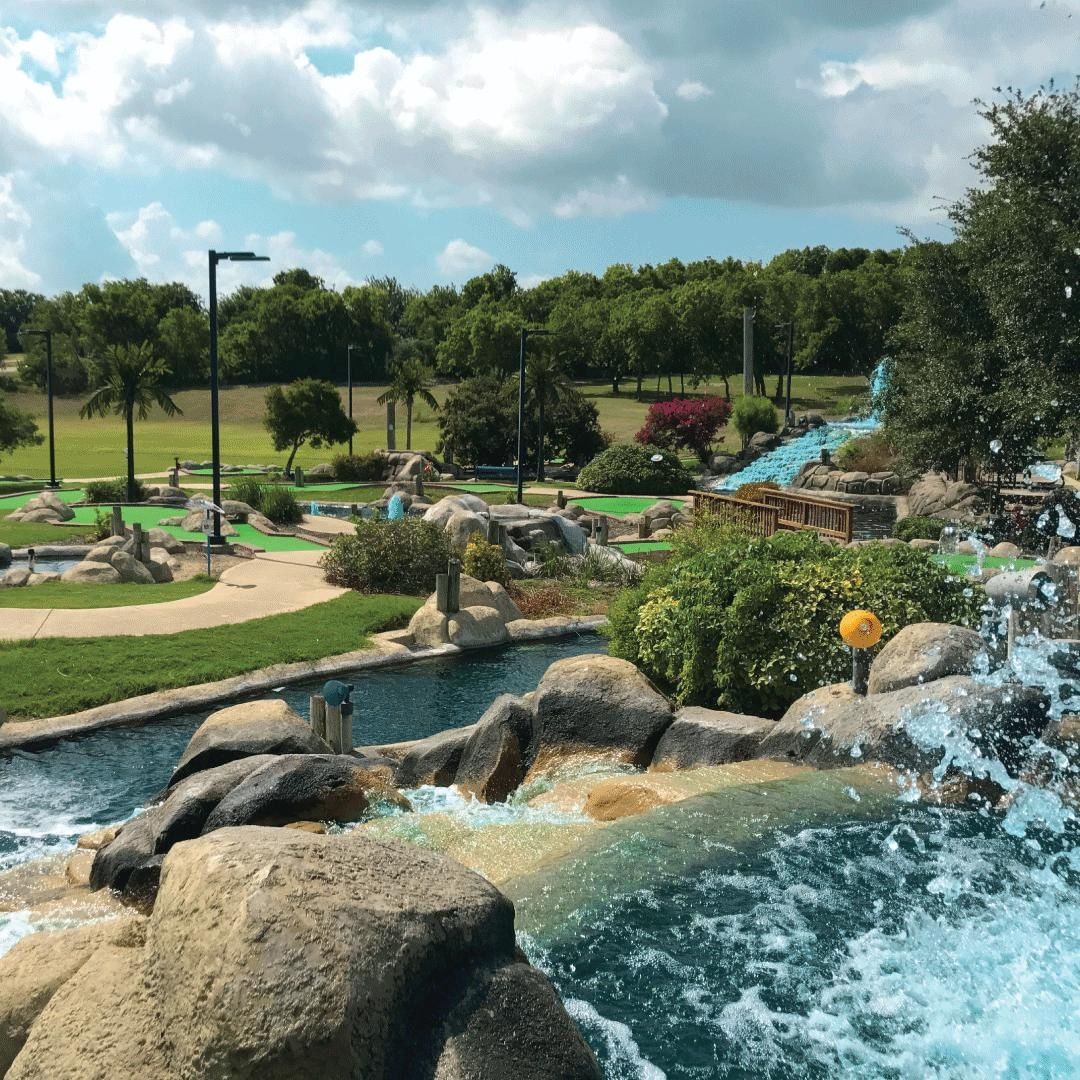 One of the best amusement parks in Austin, Texas isn’t actually in Austin.

Head to Austin suburb Pflugerville next time you have a kid’s birthday to plan. Spread over 23 acres are a pre-teen wonderland of well-spaced activities. Kids have their choice of go-karts, bumper boats, mini golf, batting cages, rock climbing, bowling and carnival-style rides.

And don’t forget the pizza. Austin’s Park n’ Pizza sports a pizza buffet, as well as a full-service bar and grill. They even have a weekday happy hour from 4 to 7 p.m.

The Mighty Thomas Carnival is an amusement park tradition in Austin, elsewhere in Texas and nine other states. The Carnival is a regular guest at Burnet’s Bluebonnet Festival and other festivals and fairs. Depending on the magnitude, it can offer up to 50 rides, 50 games and 15 food concessions.

The Thomas Carnival is almost 100 years old. Originally from South Dakota, it now winters in Austin. Its rides include classics like the tilt-a-whirl, theme park-worthy coasters and kiddie rides.

Blazer Tag boasts the biggest laser tag arena in Texas. Even though there aren’t national rankings for this sort of thing, we haven’t heard of a larger arena anywhere.

Games take place in a retrofitted theater, over three stories of bridges, labyrinths and snipers’ outposts. There are 20 raised areas that range from five to 16 feet high. Over 20 different storylines and scenarios keep the experience fresh on repeat attempts. 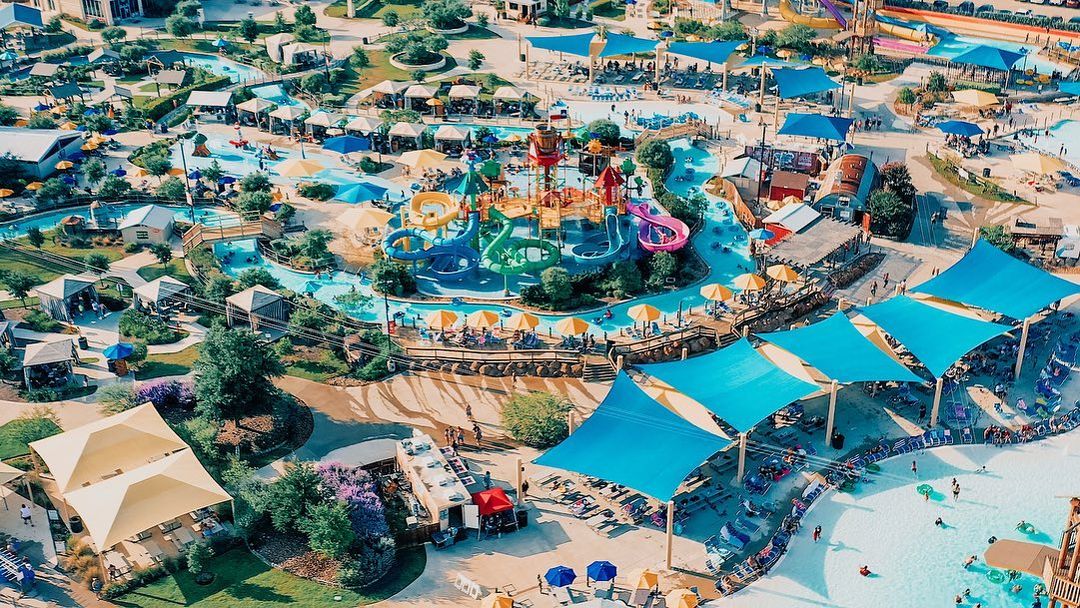 Typhoon Texas is the sister water park of the Houston branch. Set on 23 acres in Pflugerville, Austin’s premiere family water park is big in all the right ways.

A 1,000-foot lazy river runs through the premises, which also features a giant wave pool, a 10,000-square-foot activity pool and several multi-slide towers.

‘The Thrill Capital of South Texas’ is big enough to draw thrill seekers to San Antonio. There are 39 rides, 10 roller coasters, a 1920s-themed replica boomtown… and a whole lot more.

The park was originally built as a destination performance arts park with a focus on Texan musical culture. This heritage has shown in its 10 Golden Ticket Awards wins for ‘Best Shows in the Theme Park Industry’ from amusement park magazine Amusement Today. 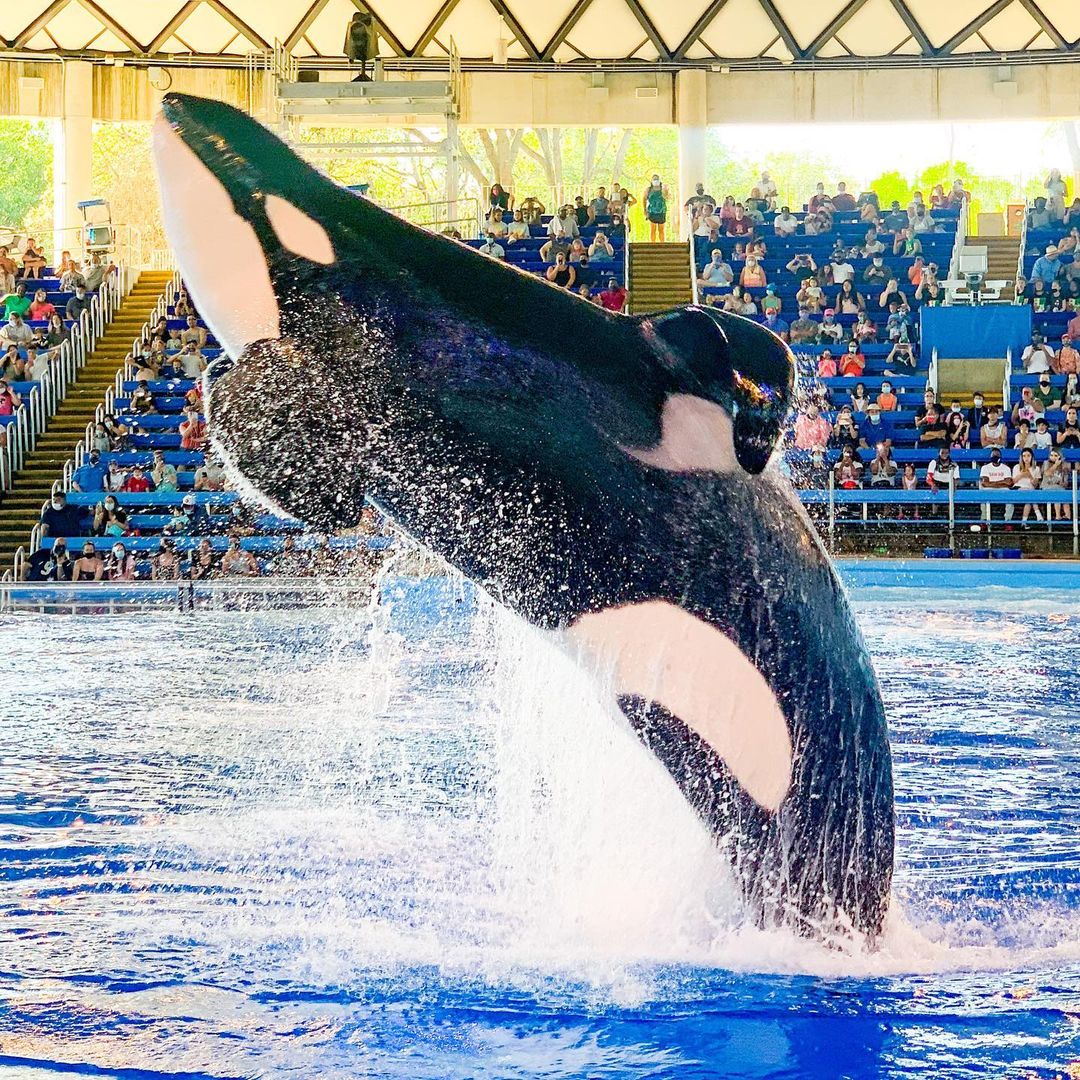 At the time of its 1988 debut, SeaWorld San Antonio was billed as “the largest educational, marine-life theme park in the world.” Now it’s only the largest marine life park in the U.S.

SeaWorld’s 250 acres sports 14 rides and six regular shows and animal presentations. As far as main attractions, it hosts 18 bottlenose dolphins, 10 beluga whales and five killer whales. It has one of the most prolific beluga breeding programs of any zoological facility in the nation.

In addition, the SeaWorld Rescue team has helped over 38,000 animals, with the goal of rehabilitating them and returning them to the wild.

New Braunfels is a medium-sized city on the way to San Antonio, sitting at the crossroads of the Comal and Guadalupe rivers. Drawing on the city’s German heritage as well as its spring-fed topography, the original Schlitterbahn is as big a part of the landscape as anything else.

Winner of 22 Golden Ticket Awards for ‘Best Water Park in the World’ from Amusement Today, the Schlitterbahn is worth a trip. It’s a whole-day destination suited to the whole family, where picnics are welcome. In total there are 51 attractions spread over 70 acres.

The Schlitterbahn is legendary in the world of water parks, with the world’s first wave river, the Torrent, and the world’s most award-winning uphill water coaster, the Master Blaster. Running through it all is The Falls, the world’s longest tubing river, which features rapids and tube chutes.

Great Wolf Lodge bills itself as ‘The Best Indoor Water Park in Texas,’ and its 80,000-square-foot footprint makes a convincing case. But the concept at Great Wolf Lodge goes beyond the water park.

The Lodge is so named for its guest rooms designed like north woods cabins. The water park is mostly for the use of overnight guests — more precisely for the kids, while the adults hang out in the 21-and-over hot tub area or in one of the camping-themed restaurants.

The water park is kept at a year-round 84 degrees, and that’s not all that Great Wolf Lodge has to offer. In the water and out, there are over 50 activities to try.

Houston’s Typhoon Texas Waterpark is the original. At 25 acres, the Houston branch is even bigger than Austin’s.

All the water park classics make an appearance here. There are 33 slides and a lazy river surrounding them. Concessions and live entertainment are also part of the package. 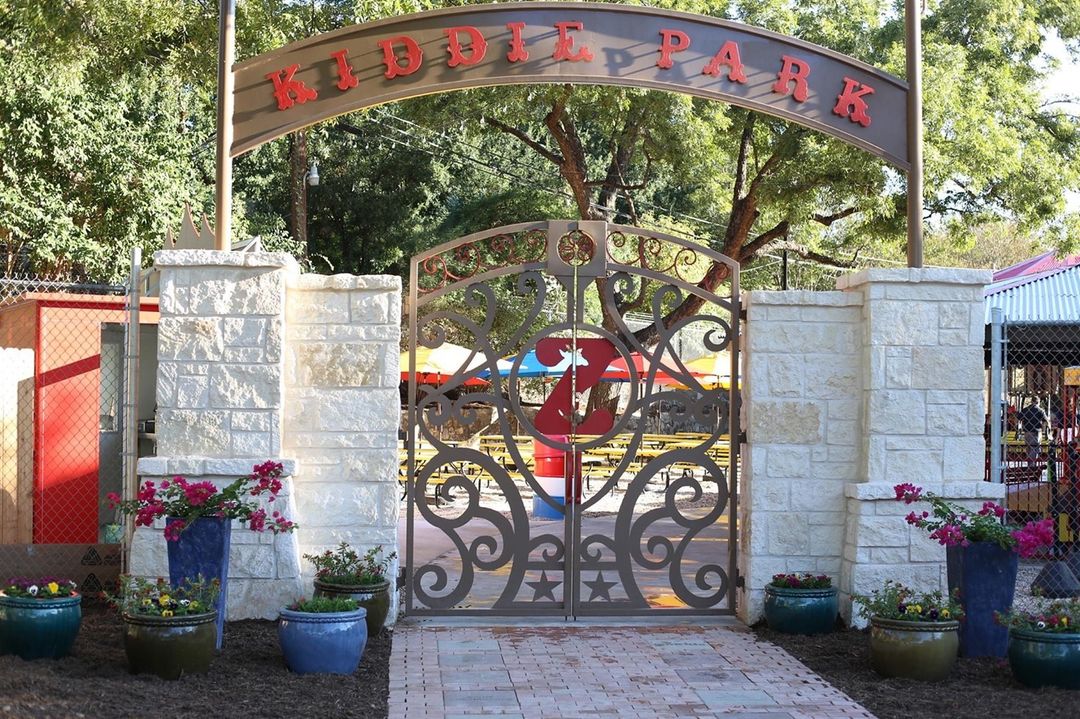 San Antonio’s Kiddie Park is old-fashioned for a reason — built in 1925, it’s the oldest children’s amusement park in the country. In 2019, the San Antonio Zoo took the city staple under its wings, transplanting the original rides to a zoo-adjacent location.

The legendary hand-carved Herschell-Spillman merry-go-round dates back to 1918. The newest ride was made in 1963. Most of the attractions are hand-carved and hand-painted, maintained lovingly over the years.

Long-timers will recognize Kiddie Park’s original signage, tables, clown head trash cans, and replicas of the Statue of Liberty and Eiffel Tower. The zoo even relocated the gravel from the original location. 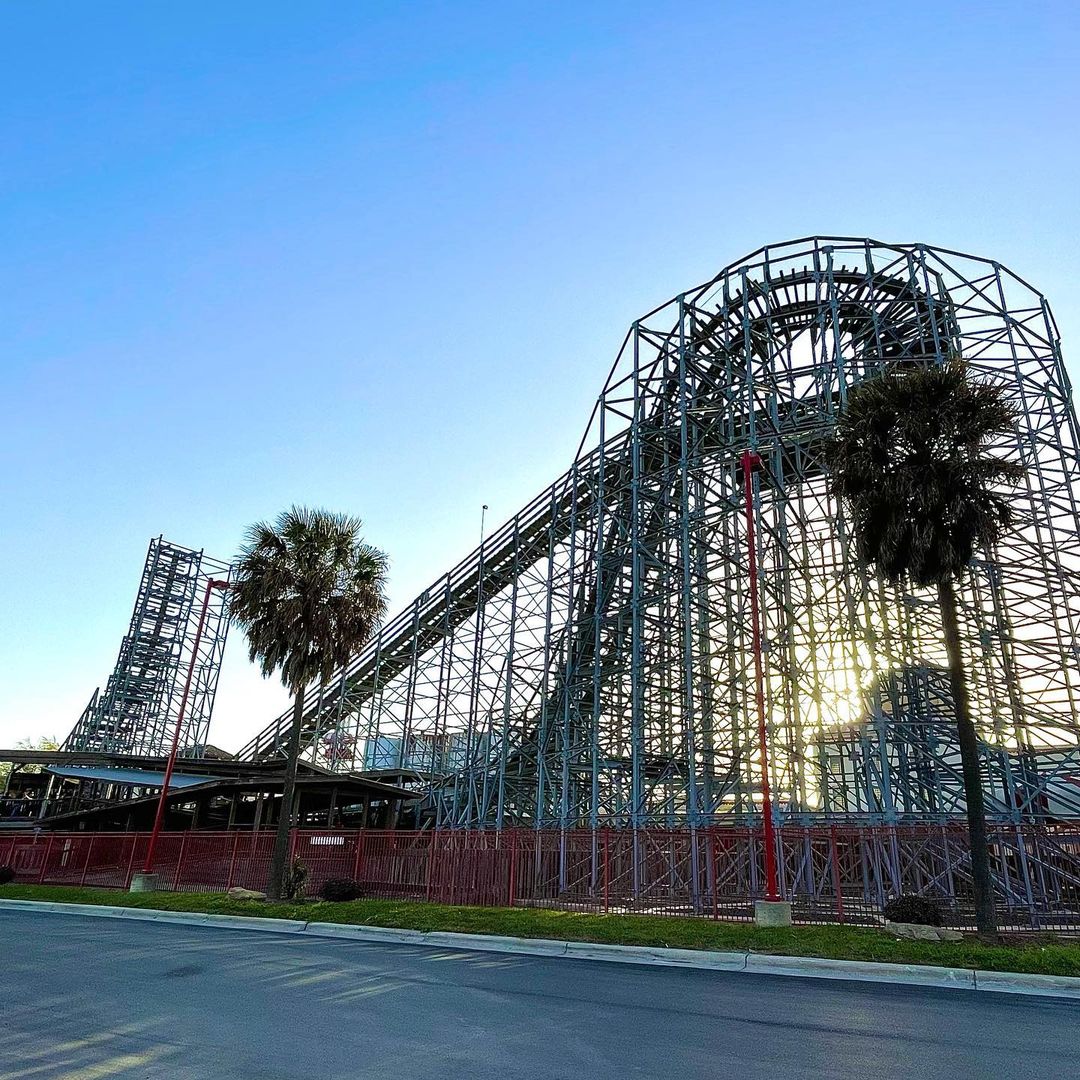 ZDT’s Amusement Park is another stop on the way to San Antonio that’s worth its own trip. The property was once an agricultural distribution center, and the park commemorates this history at every turn.

The climbing wall is built on the side of a grain silo. The go-kart track runs through warehouses originally used for grain processing, with the original equipment suspended above. The walkway to the water park section is built on train tracks that transported grain.

ZDT is named after its founders’ three children — and as these children have grown, the park has developed. In 2015 ZDT debuted the Switchback, the world record holder for steepest wooden roller coaster, with an 87-degree drop. It’s also the first wooden shuttle coaster. 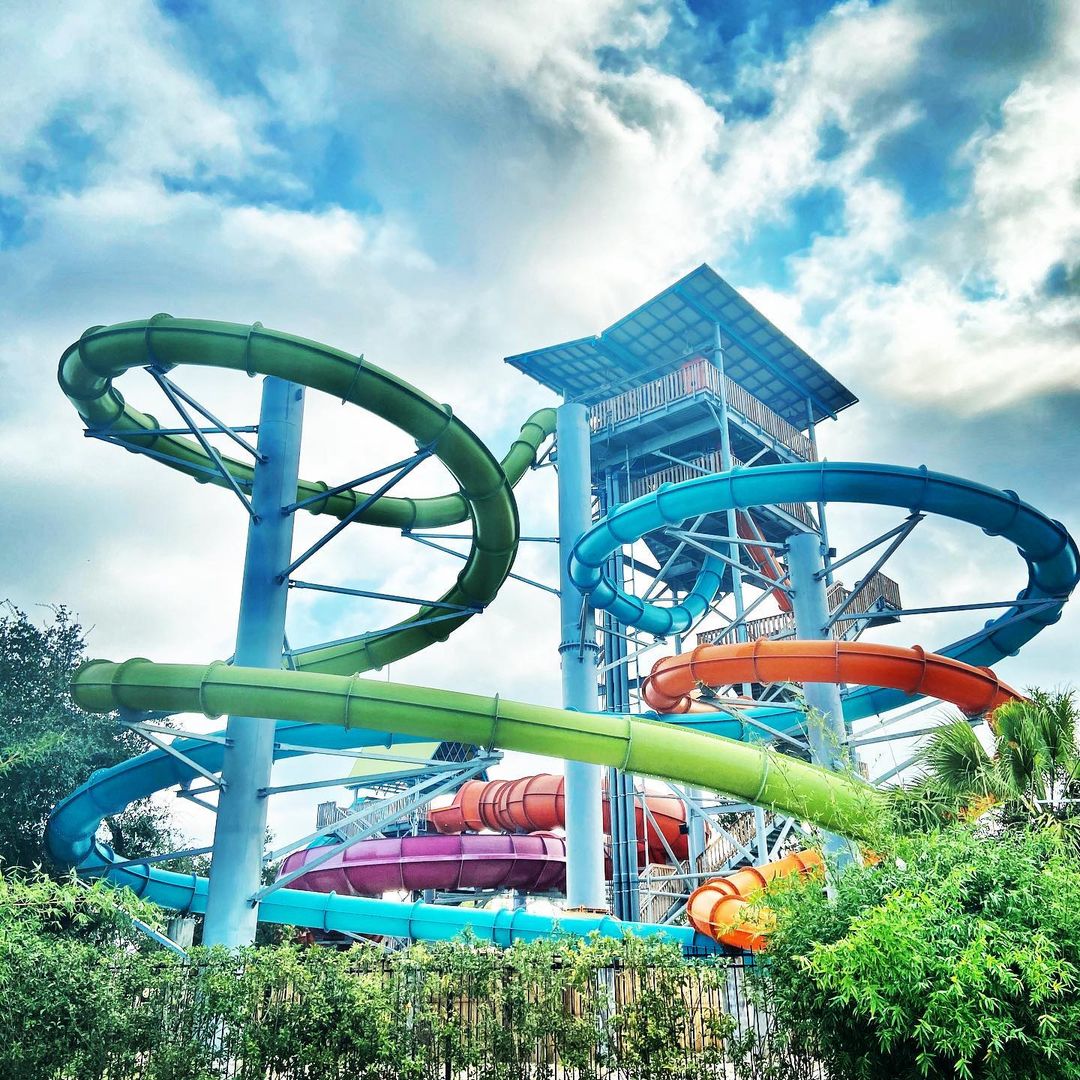 Aquatica San Antonio is notable for more than being a top-flight water park. It’s also attached to SeaWorld San Antonio — which puts it in a class of its own.

Its SeaWorld affiliation transforms some of its rides into authentic sea-going experiences. The park’s signature attraction Stingray Falls takes riders into an underwater grotto, and brings them face-to-fin with stingrays and tropical fish. It’s the only ride of its kind in the world.

But don’t lump it in under the SeaWorld banner exclusively. It’s been designed to expand a SeaWorld visit into a multi-day adventure. It’s got something for everyone in the family, including the best part of a watery adventure, the white sand beach to relax on at the end of it.

Waterloo Adventures is unique for Austin-area water parks — it’s got the water built in.

If you’re in search of something a bit less relaxed, check out sister park Lake Travis Zipline Adventures. 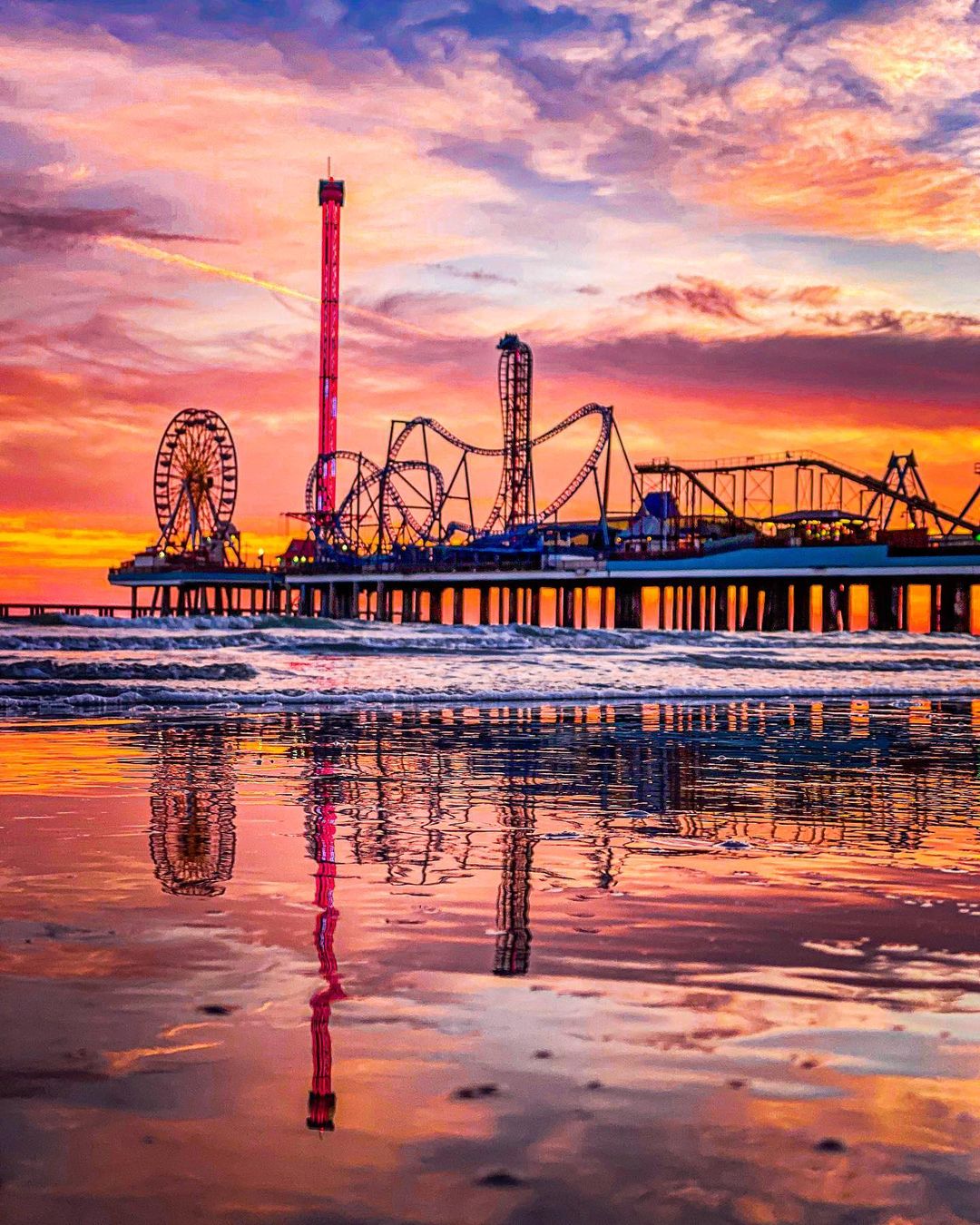 This time they renovated the pier infrastructure, the first time in 70 years. The result juts 1,130 feet into the Gulf of Mexico, and is home to 15 rides and one roller coaster. The Iron Shark is a steel coaster reaching 100 feet in height and offering four inversions, with one section cantilevered over the water.

Morgan’s Wonderland claims a revolutionary concept — it’s the world’s first theme park designed for special needs individuals of all ages. It all started when Morgan’s parents took her on vacation, and saw how other children in the hotel pool excluded her.

Morgan’s father owned the largest locally-owned homebuilding and land-development business in San Antonio, which he then sold, and the pair started work on a water park specifically geared toward their child.

Its 25 acres now house 25 rides and attractions, built with special needs individuals in mind but accessible to all. There’s a ‘sensory village’ and an 8-acre catch-and-release fishing lake. There are covered playgrounds and live entertainment. Everything is wheelchair accessible.

2107 saw the debut of Morgan’s Inspiration Island splash park. For this addition, the Wonderland creators designed specialty waterproof wheelchairs for guest use. This was enough to earn Morgan’s Wonderland ‘Park of the Year’ honors at Amusement Today’s 2017 Golden Ticket Awards.

Get Out There and Enjoy the Best Amusement Parks in Austin!

Amusement parks in Austin, Texas are often overlooked. On one side, Austin fun-seekers have access to a bounty of natural attractions. On the other, there are subcultures so rich that they’re in the city’s slogan.

But in the hot weather, you may hit a wall. If and when that happens, Austin has some world-class wonderlands waiting for you and your family.