Home » Blog » Cathedral of Junk: What to Know Before You Go

Cathedral of Junk: What to Know Before You Go 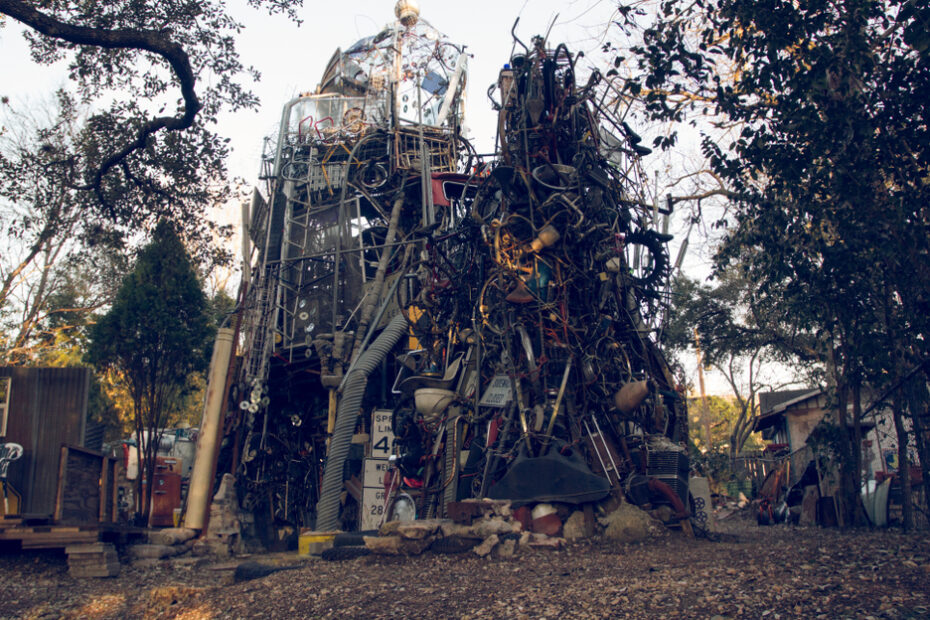 Not many improvised structures capture Austin’s spirit as well as the Cathedral of Junk. This isn’t found object art — it’s exactly what it says on the label.

This isn’t a dig. As long-timers say, the Cathedral of Junk is one of the last uncompromised pieces of ‘Keep Austin Weird’ culture left.

It’s a cathedral where people have gotten married. It’s junk because that’s what creator Vince Hannemann’s mother once called it.

Hannemann now has “JUNK KING” tattooed on his knuckles.

All of this tongue-in-cheekiness is possible because the Cathedral of Junk is one of Austin, Texas’s own. It isn’t art with an agenda.

“I just did it because it was kinda cool,” Hannemann told Roadside America. “It’s my clubhouse. It’s fun. Kids, when they come through, they know what it is.”

History of the Cathedral of Junk

Hannemann has been building sculptures ever since he was young. Here’s what he calls his first sculpture — dating from 1979.

In 1989, he started assembling the old bicycle wheels, street signs, exhaust fans, televisions, and assorted bric-a-brac that would become the Cathedral of Junk. He didn’t have a plan.

“People ask me all the time, ‘What made you want to do this?’” Hannemann told Roadside America. “Like it had some sort of profound meaning. I just did it because I liked it. And when I stop liking it I’ll take it down.” 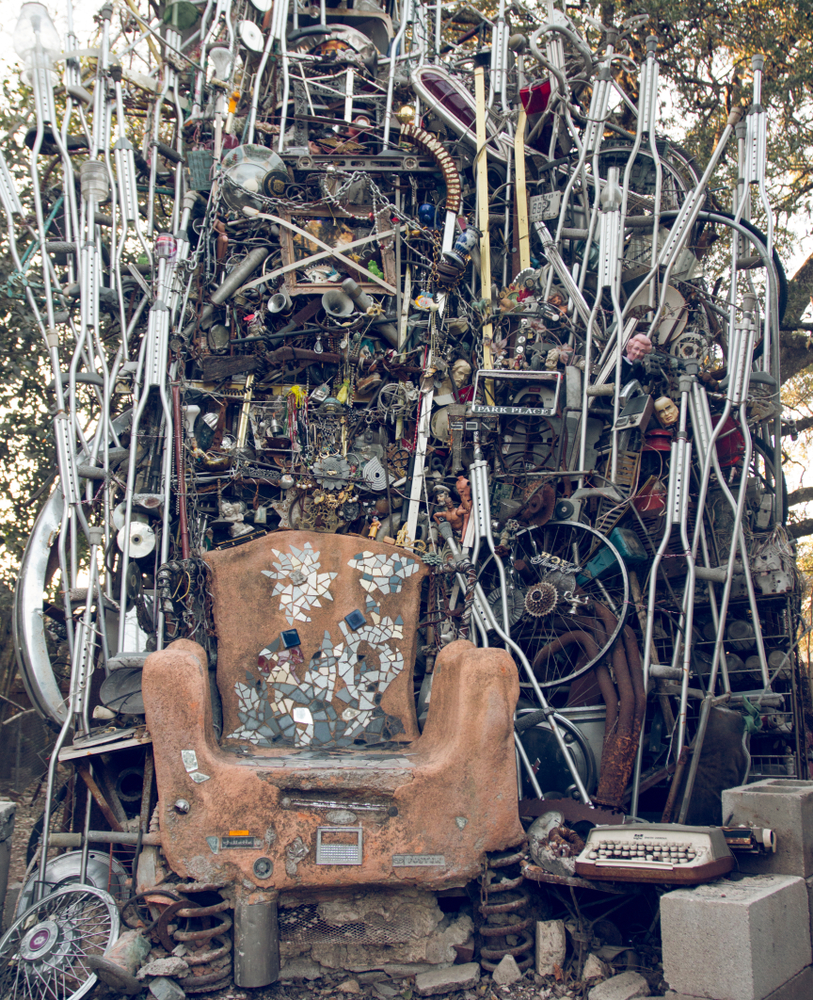 It was his mother who dubbed it the Cathedral of Junk. The name stuck. Slowly it became an Austin touchstone.

The Cathedral has been evolving ever since the start. Hannemann selects from the offerings people bring him — he calls shipped donations ‘junk mail.’ He is selective about what makes the cut, even more so since his brush with the city’s inspectors.

In 2010, Austin found the Cathedral in violation of code. They sent engineers through to test for weak points. There was a touch-and-go period of seven months where the Cathedral’s fate was uncertain.

But the Cathedral had already secured a place in Austin’s soul. Hundreds of volunteers worked alongside Hannemann to make the Cathedral more structurally sound, removing 50 tons of junk (it still weighs in at nearly 60 tons). Hannemann says it’s built to withstand Texas storms.

In 2020, he told Austin Monthly that the Cathedral was “99 percent done.” The Cathedral has consumed most of his working life. He’s closing in on the point where he can enjoy it too.

Touring the Cathedral of Junk

The only sacrifice made to the city’s inspections was the ‘Pyramid of TVs.’ The power supply which illuminates the neon signs and lights rigged throughout also kept the pyramid’s 200 TVs flickering.

Now there’s a smaller ‘Zen Garden of TVs.’ But the rest of the Cathedral is still at its peak glory.

Light shines in from an open ceiling in the main chamber, which is 30 feet tall. 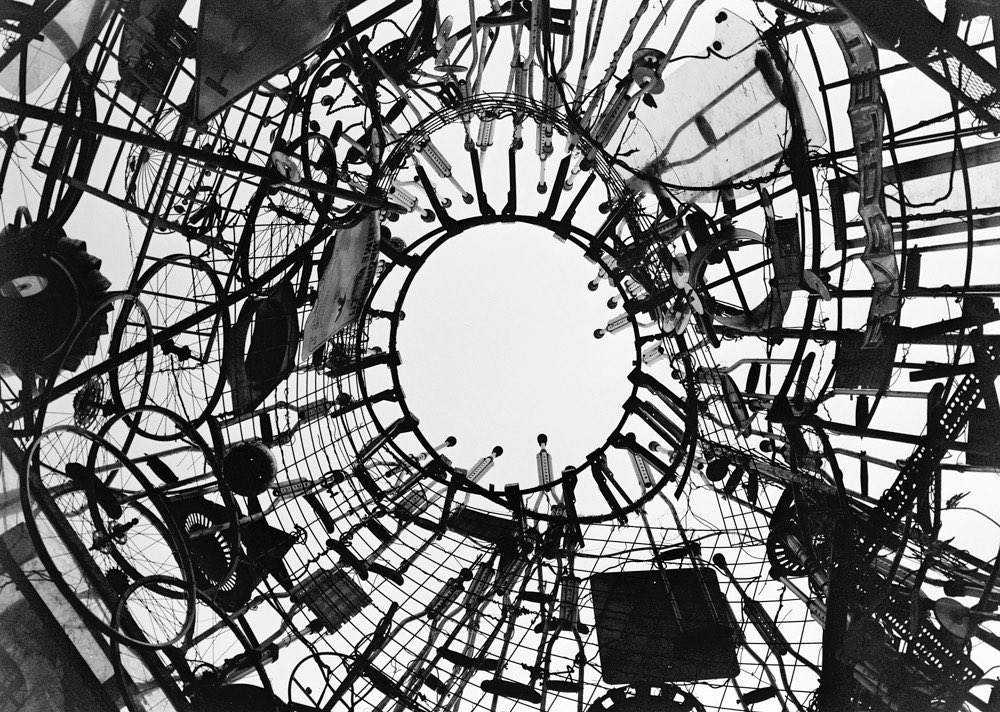 While the odds and ends that make up the Cathedral are “MacGyvered together,” there is real structural integrity to it. Its bones are improvised yet solid trusswork, its steps concrete.

Parents say that it’s a good place to bring their children, even their youngest. Senior citizens groups regularly tour the premises. Much of the grounds are wheelchair accessible.

The Cathedral is filled with visual gags, and a playful brand of art. 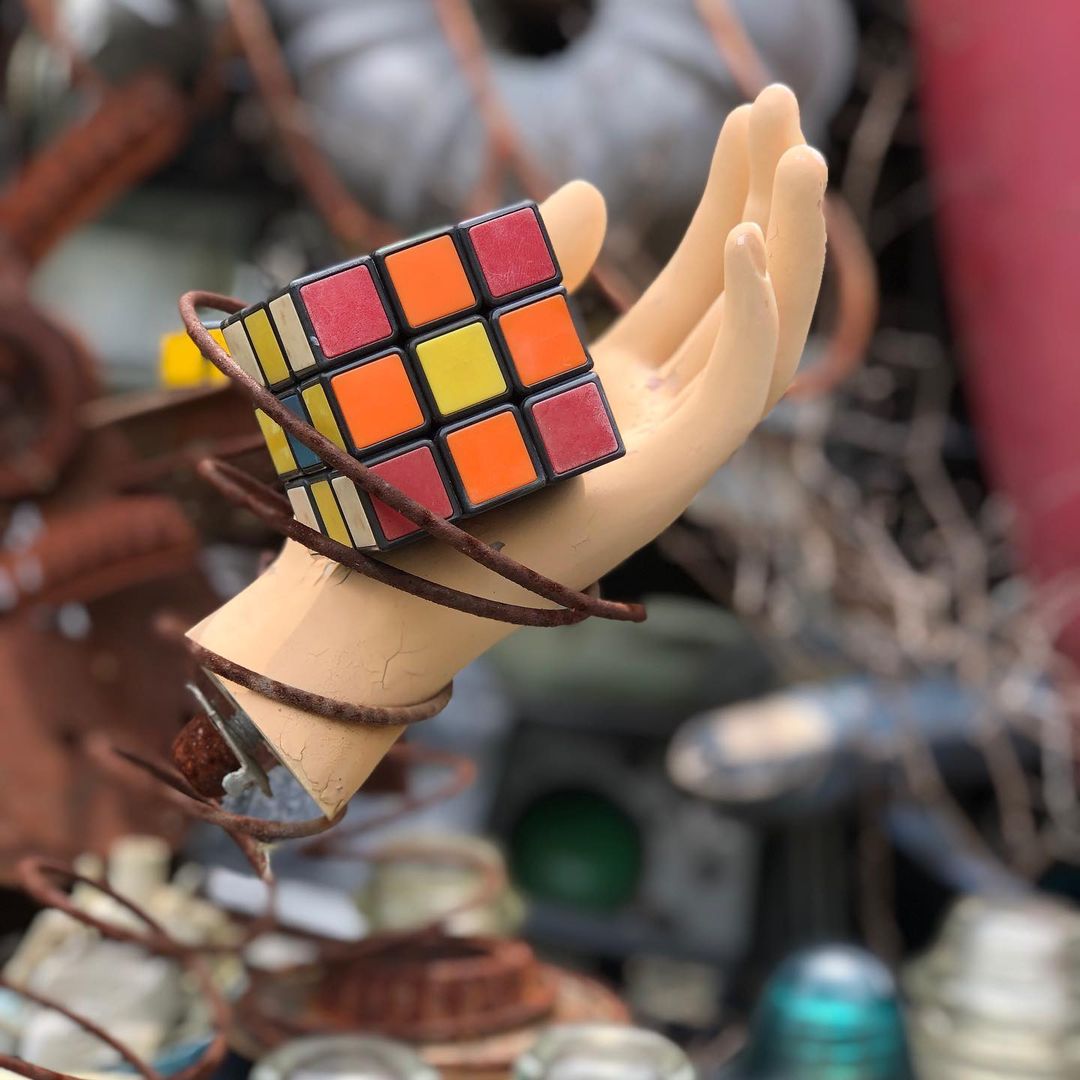 At times, Hannemann will accompany visitors, pointing out elements and cracking jokes. He’s had a personal hand in assembling every object and arrangement.

Sometimes visitors will feel a personal attachment as well. It isn’t uncommon for visitors to be moved, both spiritually and sentimentally.

“Some people recognize junk that they used to have,” Hannemann told Roadside America. “A few people get overwhelmed and have to leave. Sometimes people get weird. Some people cry… They just get overcome or something, I dunno.”

The mass-production cast-offs that make up the Cathedral were once part of people’s lives. In Hannemann’s creation, they’ve gotten a second life. 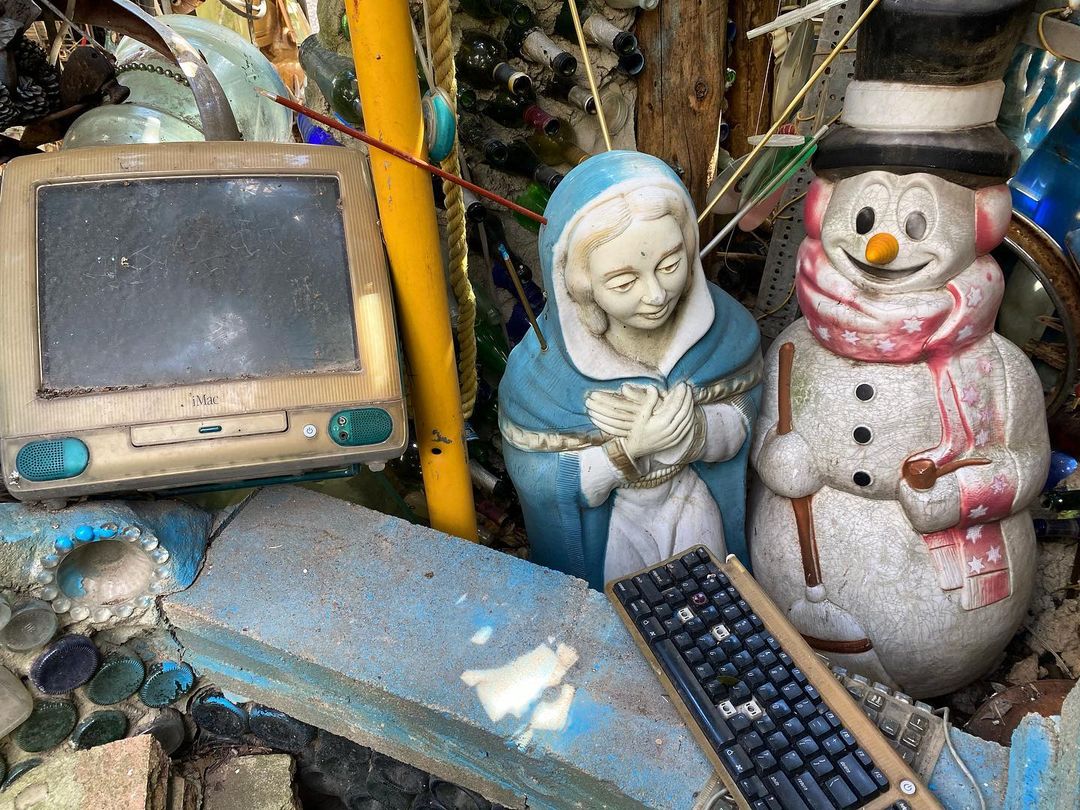 What to Know Before You Go

The Cathedral is located in Hannemann’s South Austin backyard. You’ll have to find street parking on Lareina Drive — he’s at 4422 Lareina — or on nearby St. Elmo Road. You’ll have to catch Hannemann when he’s home.

Plan to spend an hour on your visit — there are many passageways and details you’ll miss on a rushed tour.

You can picnic on the Cathedral grounds as long as you clean up after yourself. Alcohol is prohibited.

Use the bathroom before you visit. There are no public facilities onsite. 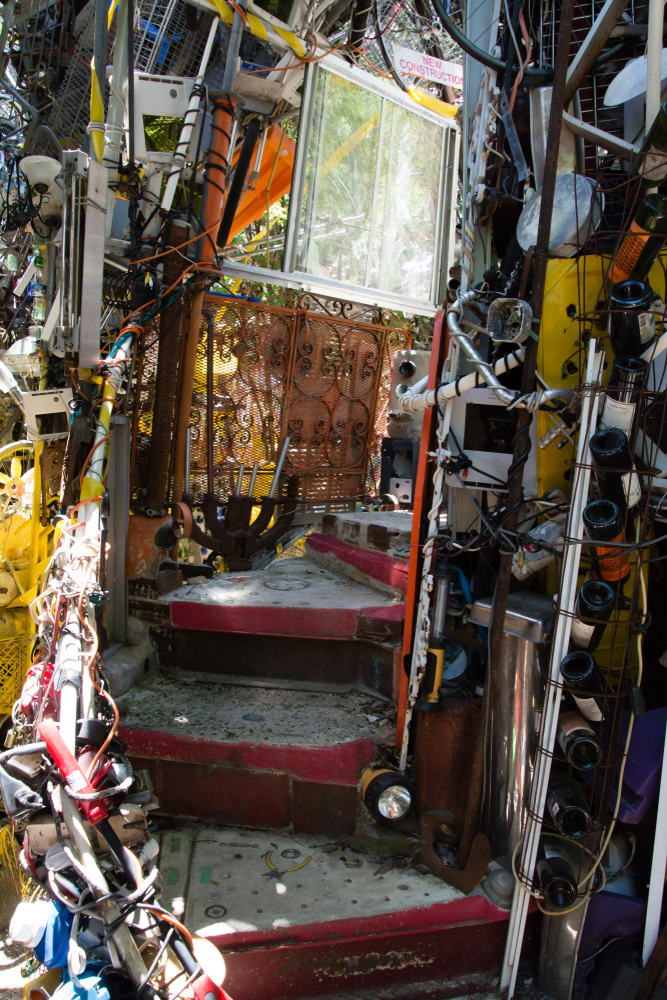 Like most things surrounding the Cathedral, visits are also improvised.

With a set schedule, the City of Austin would consider him an “official business.” But we also suspect he likes the flexibility.

One type of thing Hannemann isn’t necessarily looking for is more junk. Call ahead with your offering before bringing one.

As of 2020, the requested donation for groups is $10. Individuals are asked to contribute $5, and kids get in free.

Renting the Cathedral of Junk

The Cathedral can be rented for any type of function — you’ll need to work the specifics out with Hannemann.

In the past, it’s hosted weddings, record releases, bachelor parties, birthdays, and tour groups of school children and senior citizens.