Home » Blog » 13 of the Coziest Camping Spots Near Austin

13 of the Coziest Camping Spots Near Austin 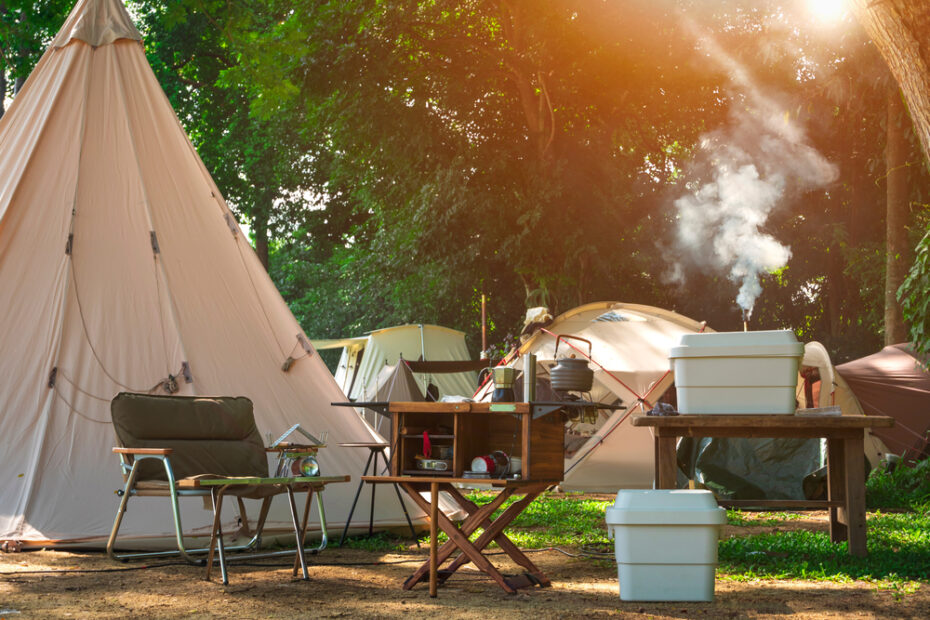 The popularity of camping near Austin dates back to prehistoric times. Two of the oldest Paleolithic camping sites in Texas are near Austin — the Levi Rock Shelter and Smith Rock Shelter.

More recent traces of camping near Austin, TX are found along the waterways. Barton Springs proved to have some of the best camping sites near Austin for generations of nomadic Native American tribes.

Tent camping near Austin, TX was the principal mode of regional housing as late as 1837, when the first permanent settlement in the area was recorded. Even then, what we’d now call cabin camping dominated the area near Austin for decades longer.

What follows is our list of the best camping spots near Austin.

Best Camping Spots Within One Hour of Downtown Austin 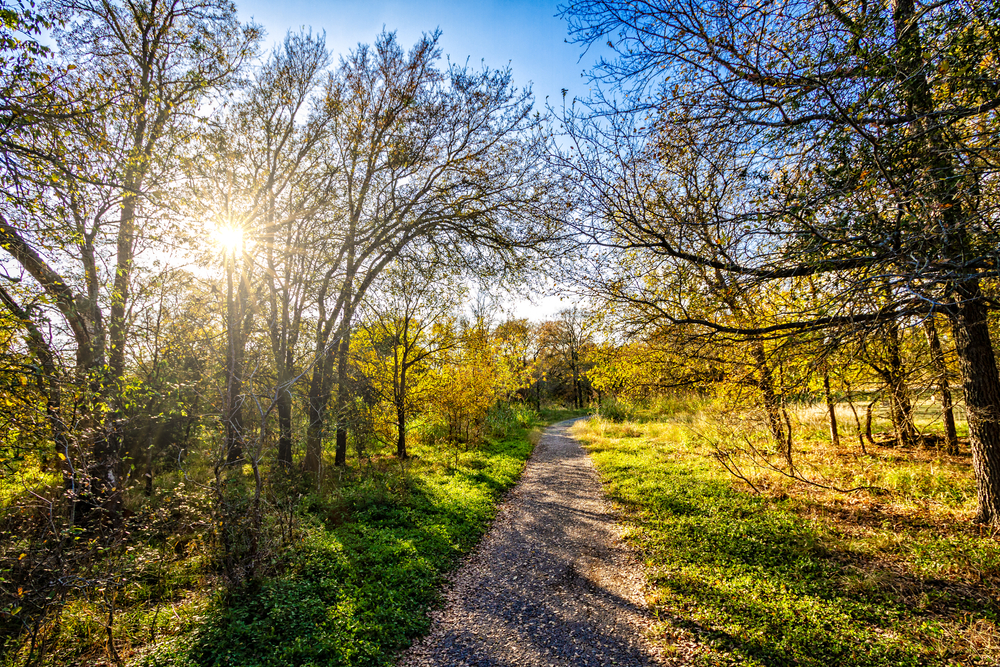 The Austin outskirts has its share of beautiful places — many of which have camping accommodations!

Below is our roundup of the best camping spots within a one-hour radius:

McKinney Falls State Park is popular for day trippers… But the park has more to offer than 641 acres of waterfalls, swimming, fishing, birding, biking and hiking.

The park’s 81 campsites are all equipped with water and electricity, suitable for tents or RVs. There are six newly remodeled cabins for rent alongside Onion Creek, each of which sleeps four. And larger groups are welcome at one of the group camping sites — kitchen and amphitheater optional! 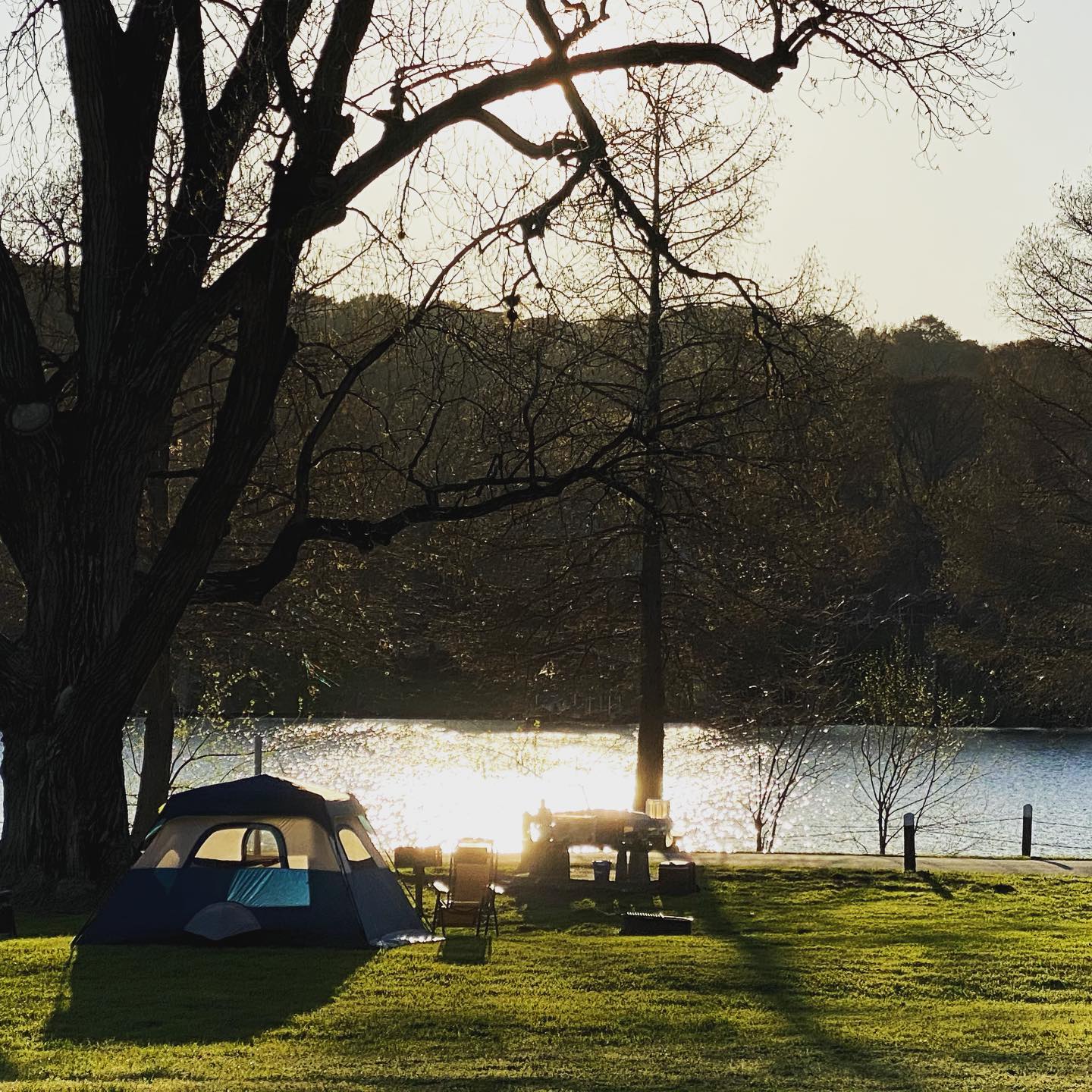 Just 15 minutes away from the 360 Bridge, Emma Long Metropolitan Park is one of the few places to camp within Austin city limits. Emma Long’s three camping areas are spread across its lakeside urban forest, hugging the shores of Lake Austin. This makes it a popular option for watersport staycations.

The park offers 46 tent sites and 20 RV spaces, all close to the grills and picnic tables that dot the park. If you’re up for paying a premium, there’s even a waterfront option.

Sandy Creek is another lakeside destination — this one bordering the occasionally algae-clogged shores of Lake Travis. When there isn’t a high-algae warning in effect, swimming is an option. Boating, hiking and fishing are always options.

Sandy Creek has 20 primitive camping sites without utility hookups. RVs are permitted in the park, but strongly encouraged to stay away — the park’s narrow roads make navigating a challenge. 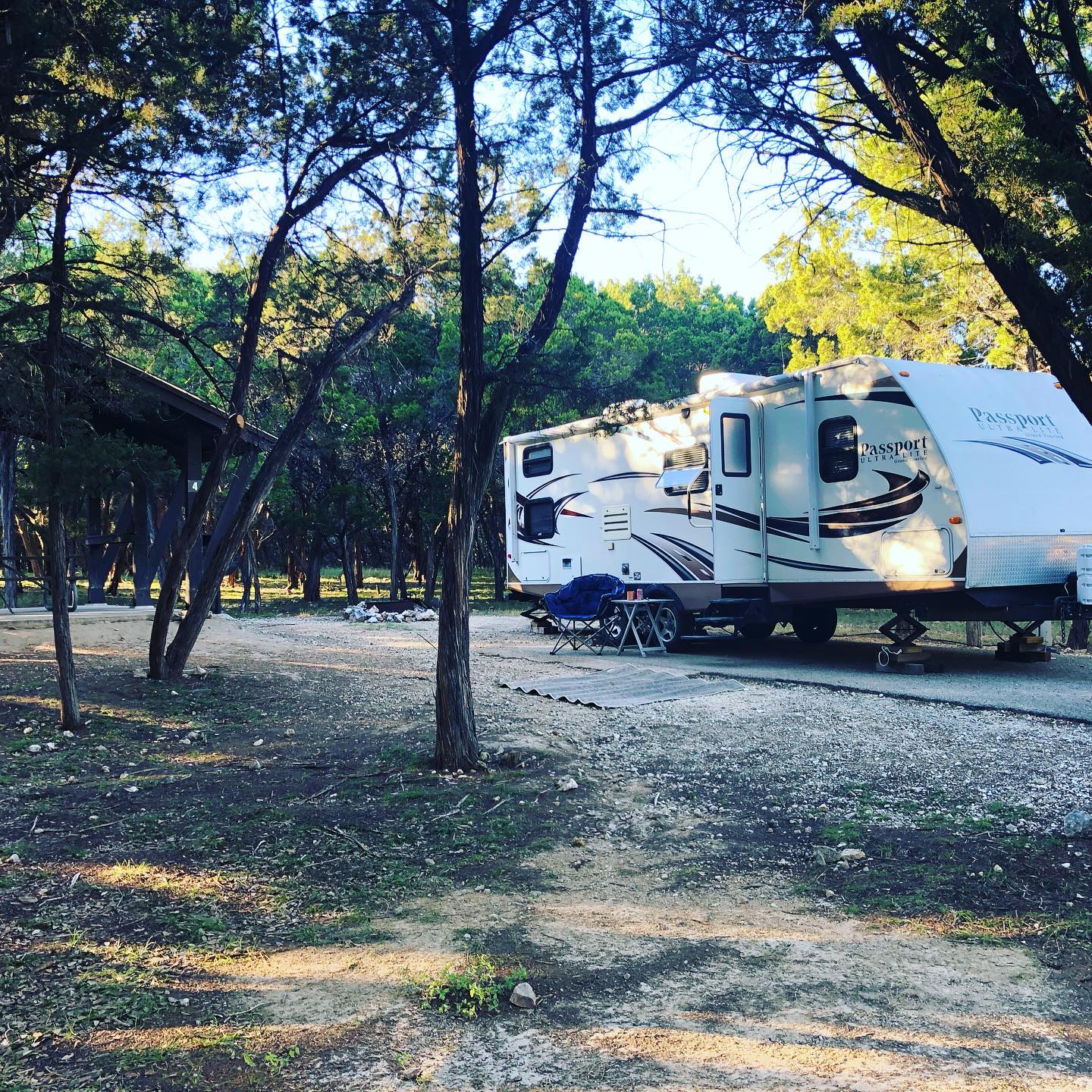 Cedar Breaks is another lakeside getaway, on the Lake Georgetown reservoir on the north fork of the San Gabriel River. Its boat ramp and swimming beach allow access to the southeast side of the lake, with Jim Hogg Park and Russell Park further to the northwest. All three parks have camping facilities, and a 26.5-mile hiking trail connects them.

If you’re looking to camp in Hill Country, you could do worse than Krause Springs. This Spicewood property holds 32 springs, which feed into pools which in turn flow into Lake Travis. The man-made pool is a highlight.

Tent camping is theoretically unlimited, but RV campers should call ahead to reserve one of the 24 utility-equipped spots.

Lockhart State Park is a well-maintained state park on the way to San Antonio, with a swimming pool and nine-hole public golf course. There’s fishing, geocaching and a small waterfall in this quirky little park.

Pedernales pretty much wipes all the other waterfall options near city limits off the map. Its 5,200 acres hold 20 miles of trails and five miles of river access — including a stunning 50-foot falls section cascading over 3,000 feet of step-like limestone layers. Seafarers can swim, tube or kayak. Landlubbers can select from wide-ranging trail options, which run the gamut from short nature hikes to single-track mountain biking trails to horse riding paths.

There are 69 fully-equipped RV hookup sites. Primitive camping is available above the bluffs, at a minimum two-mile hike in. 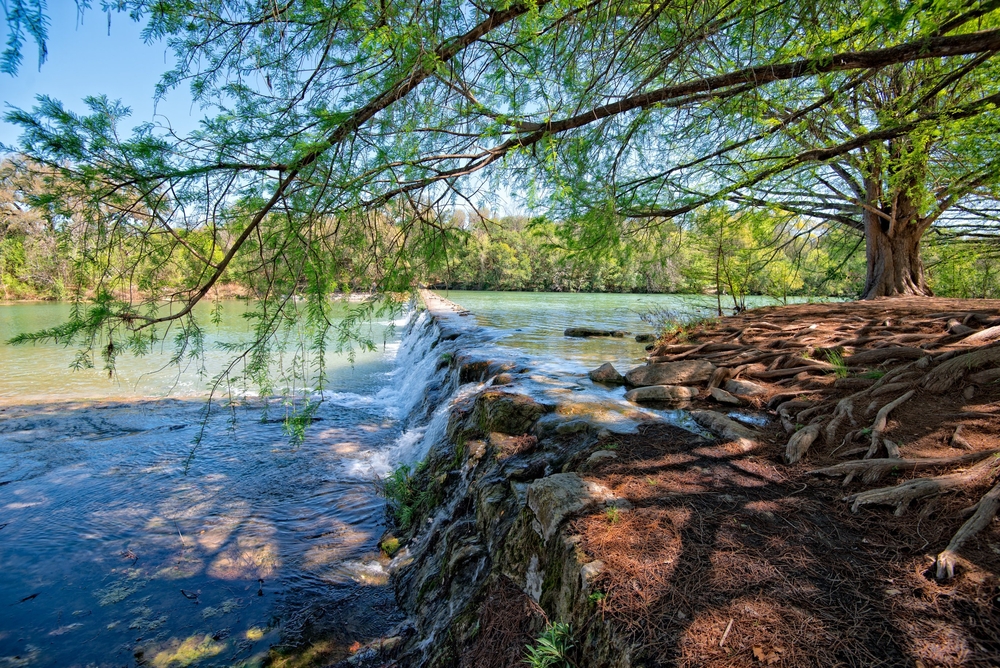 Head a bit further out and the crowds thin. That’s a good thing, because several of these parks specialize in seclusion tough to find closer to the city.

At just over an hour lies small but wonderful Blanco State Park. Its main draws are two man-made stone dams that span the length of the river, producing a long, uniform waterfall wall. Other water attractions include canoe rentals and a man-made wading pool, suitable for young children.

There are 29 campsites, all of which are equipped with electricity, water hookups and picnic tables.

Palmetto State Park is named for the tropical Dwarf Palmetto plant found there. This Gonzales County park is also home to a four-acre u-shaped lake, wooden boardwalks that span its woody paths and several stone buildings built in the 1930s by the Civilian Conservation Corps.

There are 18 RV sites and 19 tent sites, as well as a group site that can accommodate up to 50. There’s also one air-conditioned cabin on the property.

Inks Lake State Park is a reservoir-centered Hill Country gem in nearby Burnet. The lake’s level stays consistent year-round, which means that it’s used by weekend water seekers year-round. It covers 831 acres and hits a max depth of 60 feet, making it sought after by swimmers, boaters and fishers alike.

It features nearly 200 campsites with a variety of amenities. Some camping loops even have playgrounds! In addition, there are 22 cabins and three group campsites.

Colorado Bend is so notable that they named a town after it… or maybe it’s just the bend in the Colorado River that both abut. Regardless, this 5,300-acre park is well worth driving to, with its archetypal Hill Country karst landscape. Within, you’ll find 400 caves, 35 miles of land trails, 10 miles of navigable river and the 70-foot drop of Gorman Falls.

All campsites are primitive. The 15 drive-in sites don’t have hookups of any kind, and potable water is a walk away. There are 28 walk-in sites along the river, with restrooms and potable water nearby, and do-it-yourself backcountry sites without either.

We’ve already gone through some true gems — so why put on the extra miles?

Trust us, these two parks are worth the trip. Get some reservations and put them on your calendar.

Tucked further out in Hill Country is Garner State Park, a 1,774-acre legend of the state park scene. It’s closer to San Antonio than Austin, but the 317,000 people who visited from September 2020 to May 2021 didn’t all come out of convenience. The 2.9 miles of Frio River, deep canyons, limestone cliffs, jukebox dances and mini golf all help to make Garner the most popular state park in all of Texas.

You’ll want to reserve in advance as the park reaches capacity quickly. Between campsites, screened shelters, cabins and group sites, Garner has a total of 372 places to spend the night.

Huntsville State Park, north of Houston, is situated around 210-acre Lake Raven. Another Civilian Conservation Corps project, it still holds many of these Depression-era public works, including a swimming platform, stone culverts, picnic areas, a bridge, stone road-curbing, boat house — and of course, man-made Lake Raven. Wildlife has taken to this artificial lake like a fish to water, with crappie, bluegill, catfish, bass and occasionally even alligators calling it home.

Huntsville is another popular destination, with 170 sleeping sites in all.

Get Out and Enjoy the Best Camping Spots Near Austin!

Like everything else in 2020, camping was hit hard. Parks limited camping capacity or stopped it altogether.

But soon camping emerged as a relatively safe option — even more so once vaccines arrived. In 2021, most Texas State Parks have returned to full capacity, which is good news for the increasing numbers spending their vacations outside.

We haven’t seen the end of Covid yet, which means that the appetite for camping is likely to continue. So it’s good news that the weather around Austin rarely gets too cold, and camping possibilities exist year-round.